Right! So our Unofficial “National Holiday” is Over… WHAT NEXT?! 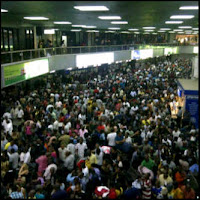 Imagine the shock when we all woke up this morning to see soldiers on Lagos streets… and of course the eventual revelation that the price of petrol was now N97 and that the strike was over!  Ok forget that I am quite upset that I can no longer sleep for hours on end and not feel guilty about it (which was my highlight of the “holiday”), I am MORE upset about the fact that Nigerians seem to have suddenly given up!  Just like that!

Ok… the NLC and TUC may have sold out… or so some people say… but guess what?!  This fight was not about them!  It was about us.  WE fought the fight!  Not the Labour Congress or the Trade Union Congress but every single one of us who stood up without fear for the very first time.  For the very first time, people still headed to a destination where they knew people had either been killed or beaten up.  For the first time we spoke with one voice!  We used our physical presence, our phones, the internet to pass across a message to the “powers that be” and guess what?!  They actually shook in their boots!  THAT’s why they felt the need to intimidate us with those soldiers!

Trending
Why Businesses Fail
How could you guys have forgotten this so quickly?! 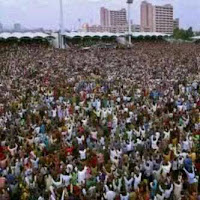 People stranded @ the Airport due to the strike
Listen people, this fight was more than just the fuel subsidy removal.  In fact, if I am correct, a lot of us supported the removal.  We just felt it was ill-timed and proper measures needed to be in place before the removal.  That was what the fight was about!  It was about fighting corruption in the highest places, it was about fighting mismanagement of funds and vagrant government spending, it was about the right to basic amenities like power and good roads, it was about fixing the refineries, it was about the wastage in government and someone budgeting N1bn on food, it was about the minimum wage of a mere N18,000 not been paid (though not many people mentioned this), it was about borrowing billions to buy 1,600 buses for 160million people when they could simply have been donated to us by the super rich ones who earn N600m a year, and the list can go on and on.  Ok let me show you a few placards just to refresh your memories: 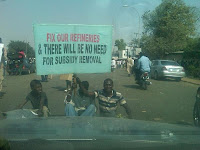 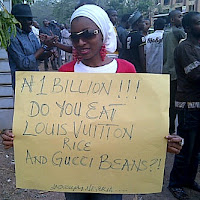 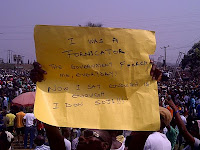 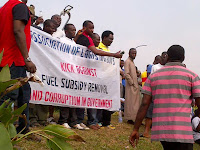 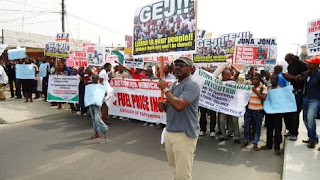 Are we simply going to forget these things just because the pump price didn’t go back to N65?!  Are we going to continue to sit back and watch a few people squander our funds?!

Listen people, who says we cannot continue to speak out and fight while we are working?!  I have seen so many BB status updates today and frankly I am disappointed!  I was so proud to be a young Nigerian last week fighting for a cause.  Yes calling off the strike before getting what we requested for may have been a temporary setback but we need to continue to fight for a better future.
Note that noone expected the fight to last this long or for us to stand together like this.  In fact, this can be our trump card to monitor those in power even closely.  We got what we got NOT because we physically occupied Ojota or the other places but because we cried out as one voice and we must NEVER forget that!  Even our brothers in other countries joined in the protests and they were not on strike, neither were they at Ojota or the other protest sites.
I never went for any of the rallies but I did my own part in my home, changing mindsets, arguing with some of the older generation who had no faith in our struggle and sneered at us, sitting at my system reviewing and adding my thoughts to a document on the way forward for Nigeria sent by a friend which he plans to submit to the Government.  Others fowarded numerous BB messages which frankly were a bit annoying but was encouraging simply because we were all feeling each other’s pain.  We need to keep that momentum going!
You guys may have lost hope but I haven’t.  Last week proved to me that each and every one of us has an activist streak inside us.  Let us continue to build on that.  Forget the NLC and the TUC, there are so many other groups that can and will continue to speak out!  We have shaken the government and we can continue to do so without starving or killing our businesses in the process!  To be honest, how sustainable was sitting at home for a month?!  Forget Egypt, Libya or the other countries.  Remember that we have NEVER been here before and we must not let that go!  Also remember that the Egyptians and the Libyans did not go around looting people’s shops, neither did they get bribed!  The Egyptian economy is not like ours, the Egyptians are not losers and guess what?!  Neither are we!  So please quit with the defeatist attitude.  It is painful yes and it hurts but we need to shake off the feeling and continue to press for what is rightfully ours!
I am so proud of all who went to Ojota today despite the soldiers being on the streets.  Thumbs up to you guys!  In my opinion, the struggle continues!  This is not about hope but about making this happen by doing our part!  It’s about changing mindsets, reminding the government of their many ‘promises’, knowing that if PHCN could have provided electricity for more than 50% of each day, then forget the bollocks they keep telling us about low capacity, making the government accountable to us, working hard to cut down on excesses in the budget and ridiculous salaries.  I wasn’t physically in a place but I did my part and I will continue to do my part.  We need to stay focused and the minute we give up, it is the beginning of the end!
Please people let us not be discouraged!  Let us continue to fight the fight and work together towards a better future!  Remember that this is just the beginning…
Smile and be encouraged!  It is well….
Here’s me giving you a BIG, HUGE, MASSIVE BEAR HUG!  MWAH!

In today's world, customer loyalty is a challenge.

What if you could stop being a slave to your busin

I wrote an article years back about how you can pa

One of the biggest challenges for fashion business

Please be very objective. Who is at fault? NOTE-