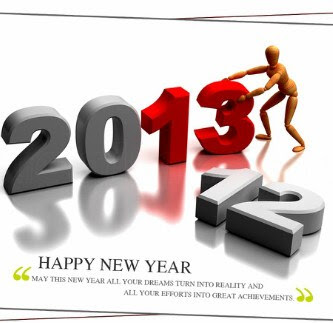 Taken from a friend’s BB display picture…
Happy New Year Everyone!!!  Here we are again at the beginning of another calendar year..  Looks like this one is also set to go faster than a cheetah… seeing it’s almost the end of the 1st day already!  Some serious deja vu going on here… 2012 went by so fast, I felt the next person would turn 50 by their next birthday!

But despite the speed at which 2012 flew past, I can never forget how spot on my 2012 catchphrase was “2012: My Year of Thanksgiving and Incomprehensible Breakthroughs!”.  And yes, I achieved a whole lot in the past year and constantly had cause to be thankful every single day!

Trending
Why Businesses Fail
And this year, here I am making my positive confession that 2013’s catchphrase “2013: My Year of Mighty Oceans!” will, by God’s grace, be true to its words!
And why did I decide on this catchphrase?!

First I realized that 1st of January, 2013 was just another day!  And like any other day, it is vital so set your to-do list or targets for the year.  The terms “resolutions” or “goals” seem to put undue pressure on me.  More often than not, I break my resolutions by Day 3.  The only one I have managed not to break since I decided on it ages ago and which is now my annual Resolution is –  “To be a better person”.

Second, I decided to stop setting unrealistic targets for myself.  Don’t get me wrong, setting tall orders as targets is great!  But what is not so great, is setting yourself up for a depressing downfall at the end of the year when you fail to meet that target.

Third, I decided that this year, I would give myself a pat on the back for all the baby steps I took in 2012 towards achieving any of my targets.  Yes I may not have met that target in 2012, but I definitely cannot ignore the work I did towards achieving it and that, to me, is extremely commendable.  No point sitting in a corner all depressed or worse, trying to start over simply because “it’s a New Year”.  I will simply pick up from where I left off.  And by God’s grace in 2013, those little drops of mine will materialize into that “mighty ocean”.

So there you have it then!  Hope you all have also set realistic and achievable targets for yourself!  Here’s praying all you hope to achieve in this year will come to pass and may all your little “drops” of effort end up as mighty oceans in this New Year and beyond!

I leave you with the message I got from the cross-over service last night on keeping the Covenant Commands in 2013:

1.  Keep the Covenant of Peace;
2.  Do not be two-faced in your dealings with people;
3. Seek judgement and justice in all that you do, i.e. be fair and balanced in all your judgements;
4.  Enter into the Sabbath of God and be at peace with all; and
5.  Take Your Controversies to God and let Him judge the matter for you.
6.  Do not engage in personal insults or attack the personalities of people in authority.  [You may disagree with policies or what they are engaged in but never attack the “person”.  Now THAT will be a tough one around here… but I guess we all know the right thing to do].

Colossians 3: 18 – Colossians 4: 1 sums up all dealings in relationships in a nutshell.  I have summarized it below:

–  Wives submit to your husbands;
–  Husbands love your wives and do not be bitter towards them;
–  Children obey your parents;
–  Parents do not provoke your children lest you discourage them;
–  Employees obey your employers sincerely and not with eye-service, fearing God; and
–  Employers pay what is just and fair to your employees (dare I add – on time!)

I pray 2013 will be YET another year where we will constantly have cause to praise God always for all major milestones reached!  May you reap all your harvest in Heaven directly from God and may He be with you throughout 2013 and beyond!

Have a fabulous and very successful year ahead!