And Still on the Subject of Decent / Indecent Dressing… 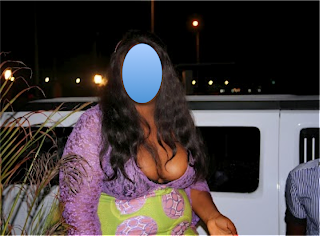 Now for anonymity sake, I’ll leave out the credit because it includes the person’s name.
Now… the article about this picture went along the lines of “how can a married woman be dressed like this to a function?!”  And here I am thinking “HUH”?!  Like seriously?  I honestly did not get her point.
What exactly is the bone of contention?  The outfit itself or the fact that the person wearing it is married?
And the second question that pops to mind is “would the outfit be okay if it was a single lady wearing it?!”
It instantly reminded me of a conversation I had with someone a while back on this same subject.  Apparently the person was at church and a lady was wearing something that did not go well with him.  Fine… he didn’t like the outfit, fair enough.  But then he concluded by saying “and the worst thing is that the lady is married”.
With this “punchline”, he obviously expected some form of huge shock or disbelief on my face but was met with a completely blank, bordering on disinterested look.  What went through my head at that point was “So?!  What’s your point?!”  And I asked, if the outfit would have been less offensive if she was single?!
Without going too much into the subject of being single, married and all what not, (that really is a matter for another day), what I will say is: people need to focus on the real issues… which in this case is the outfit.  The subject of her being single or married is totally irrelevant.  In this environment, this outfit would be seen as inappropriate for both single and married ladies. Period!