Fashion Business Tip: Commission vs Salary… Which is the Better Option for Your Tailors?! (Updated 2019) 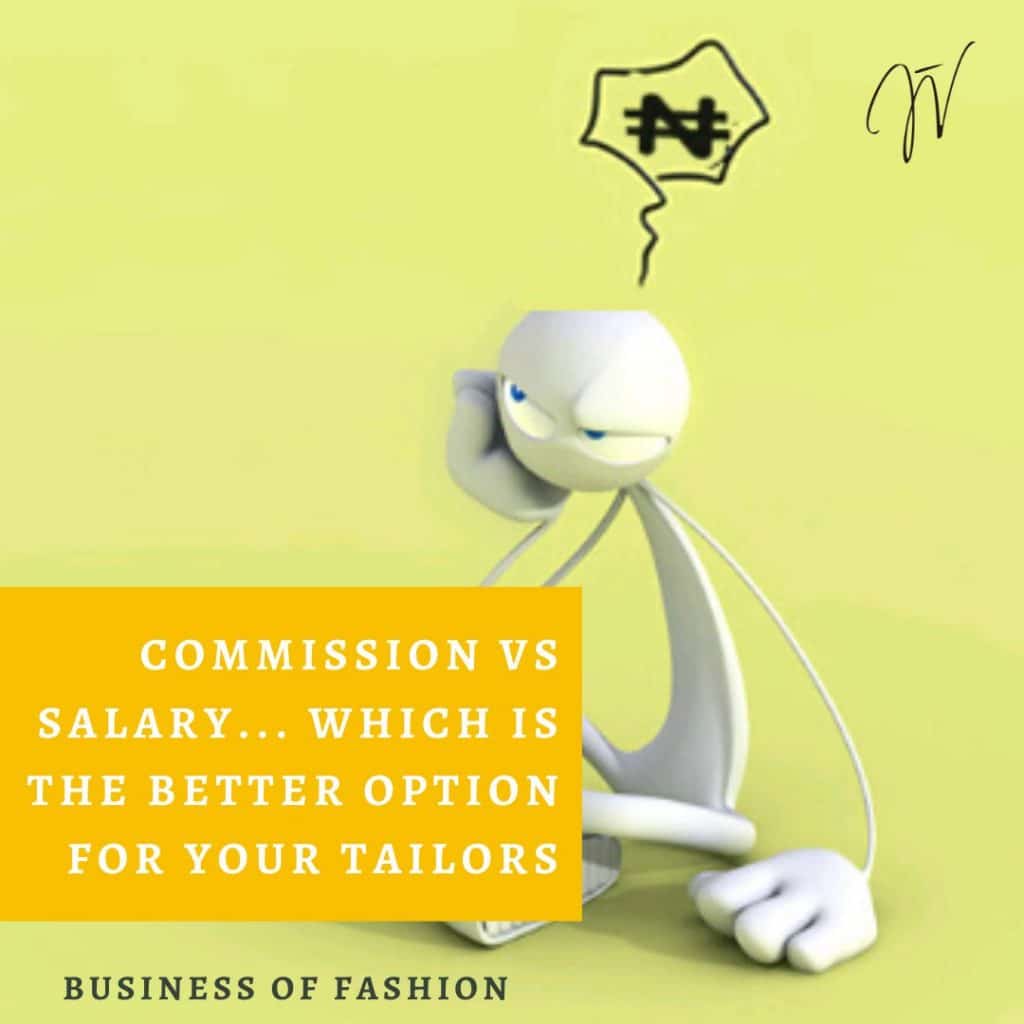 This question is one many designers always have a headache about as it deals with money matters.  While many of us shy away from it, it is one major problem everyone has. I’ll limit what I have to say to the one question most designers who run production units ask at every event, every seminar and pretty much at every opportunity:

“Should I pay my workers per piece or should I put them on a salary?”

THAT is the million-dollar question and here is my take on it even though when I revisited the subject of producing for designers, we have a policy which I will share at the end of the post.

Before I begin, first let me say there is no right or wrong answer to this question.  What is more important is knowing which option works for you and your operations.  I’ll point out the pros and cons and use my experience as an example.

When I first ran a production unit, I had no clue what the going rate for anything was.  So like everything else in my entrepreneurial journey, I learnt the hard way.   When I started, I was advised to pay per piece… which of course is what everyone means when they say “commission”.  “That’s what everyone does around here” I was told.  So I went with the “norm” against my better judgement.  Why did I say against my better judgement?

Well… I knew the obvious structure that worked was a type of “division of labour” system where one person on a production line sewed a a portion of the garment rather than the whole garment.  But how would a commission payment work if I wanted to run a production line?  How would I calculate the pay per person?  And would it be fair to punish everyone else for the incompetence of one person in the line?  (Which is actually what I do now even though I don't do commission...)

But anywayz, since I knew this was what the general consensus, I chose to try out the commission structure.  After all… that is what seemed to work around here, and I thought those running that option were doing pretty well… or so it seemed…

Not only did the machinists keep ruining my work, getting them to redo bad work was like asking them to jump in a lake!  Not only could the looks melt wires, the “inner” grumbling and their attitudes were so bad, it was completely discouraging for me as a business owner.

And to be honest, could I really blame them?  Nope.  In their minds, who cared if the stitches were not straight?  To them, the customers would not notice.  All they were interested in was churning out the work and getting paid so all my complaints fell on blank looks and deaf ears.  And to be fair… they did have families to feed… No that is not an excuse… but to them what they had done was good enough, the customer could wear it so what’s my stress?  To them, as long as we delivered the clothes, all those stories of straight stitches and perfect zips were all just a bunch of grammar.

So what was the “real” implication or opportunity cost of their bad work and my commission payment?

Simple!  All my personal hours which could have been better spent on more productive work, marketing or simply relaxing was spent working late into the night unpicking bad stitching and zips and repeating the clothes.  This also meant I was burning more of my resources, mostly my fuel, redoing work that should have been delivered.  So the payment to the tailors and the petrol burnt earlier that day was a total waste of my money!  I might as well have have fired them and sewn the clothes from scratch.

SO when this didn’t work, I switched to salary payments. 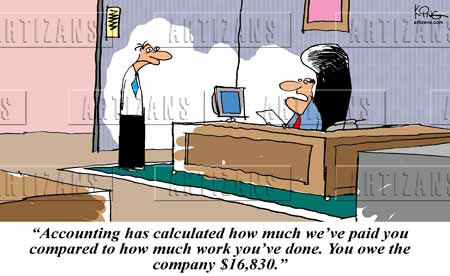 And yes!  The image pretty much captured how I felt at the end of every month when I started salary payments.  I faced a different kind of headache.  Well I must say the quality of work was a bit better… and yes the “bit better” in the tiniest text possible is intentional.  The work was better but blimey…  short of stopping work and snoring right at the machine… each garment took at least 3 days to complete… some a week!  It was just ridiculous!

To them, well… she wants good work, we’ll spend 3 days giving her what she wants.  After all we get paid at the end of every month.  But guess who was incurring all the costs!  The costs of delayed delivery to the client, disappointments, the costs of petrol, the salary payments and of course, not mentioning the opportunity costs.  So I traded a bad situation for another one.

BUT one thing I must say was at least, I didn’t have to unpick and redo the clothes as much which was better but I had to sit and think about which option worked better for me.

Eventually, I settled for the salary payment.  Only later when I stopped sewing for people did I realise that it should have been a blend of both… i.e. a basic salary which would ensure you don’t cry to the bank at the end of every month and some commission as a reward for good work.  And I tried it and it worked for the few jobs I did.

Shame I had to learn this the hard way…

Since then, I have advised people to opt for a bit of both.  Though some ask me for actual figures, truth is, it really is difficult to say since we do not have a standard pay structure in the industry.  But whatever system you choose needs to be based on an agreement which the employee will sign before s/he commences work.

For example, when you employ a machinist, you can agree on a certain figure say N30,000 but split the N30,000 into 2 parts – a basic say N20,000 monthly pay and the additional N10,000 spread over the number of days.  If you expect him/her to complete a garment in a day, he loses that portion of the extra N10,000.  That way, you don’t feel cheated, and he works hard to complete the work so he gets the extra N10k.  BUT note that late-coming should come out of the N20k basic because there is no reason why s/he should come late to work.

It might be easier said than done but when I tried it, it worked and I was able to breathe easier.

Truth is, the subject of dealing with employees and salary payments is a tough one, and you will constantly be faced with the scenario below: 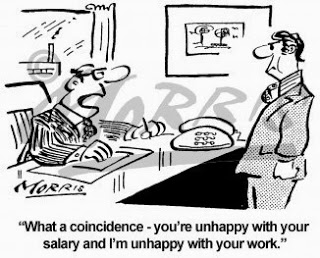 …but you ultimately have to decide which option works for you.

Before I sign off, I’d like to address the issue of “Oga ta, oga o ta, ise alaru a pe”.  The first time I heard this phrase, I had no clue what it meant until my assistant explained it to me.  To those who do not speak Yoruba, it basically means “either the business makes money or not, the employee gets paid”.   The implication of this statement?  Well, it simply means if there is no business, the employee does not get paid.

I hear some designers have this policy with some of their workers.  Personally, I think this is pretty unfair if the machinist is not involved in marketing or sourcing for work.  I know that I personally will never agree to these terms if getting the business in is not part of my job description….which I guess would explain why those who include this in their policies will have issues with their machinists leaving.

For me, I have found that salary payments make me work harder when I know people are dependent on me at the end of the month to feed their families and pay their bills.  It challenges me to get my act together because I now I have to pay salaries.  Granted at the end of the month they are smiling to the bank and I am crying to the bank, but at least it forces me to work harder and hustle, even if for nothing else, to pay my staff.

Honestly, designers should not make their employees suffer or put them on a commission payment simply because it minimises their risk.  If you cannot afford to keep someone on permanently due to shortfalls in revenue, then please vary their employment terms and make them come in once or twice a week.  They lose out both ways if they have to come to work and yet don’t get paid because you haven’t done the needful.  And honestly, they will keep leaving or even opt for other production units.

And please respect your staff.  You cannot deduct their money or not pay them for unfinished work if they spent half of their day washing your clothes or picking your child up from school.  I have heard some designers do this and I am completely shocked!  There really should be a distinction between work and your personal errands.  And if you merge the 2, then please put them on a salary.  You really can’t eat your cake and have it! 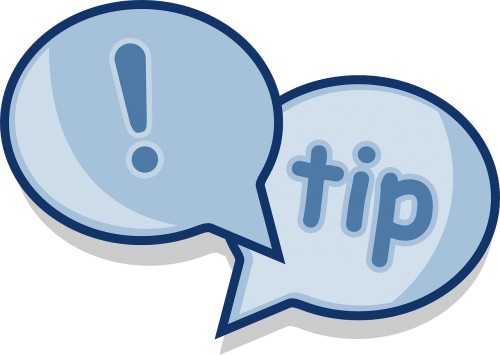 So when I revisited the subject of starting a production unit for ready to wear designers, Garment Production House, I decided on, not only a monthly salary, but also getting accommodation for my staff not too far away. Yes it still has its challenges but here are 2 things I do that perhaps help you as well save some money in the event of the tailor leaving unceremoniously.

1.  During the interview process, I inform them that for the first 3 months I will deduct a certain amount of their salary.  If they stay for one year, they get it back in full, if they leave they forfeit it.  Has it helped?  In a way.  Those who left during the year (and I did have some people leave), forfeited the amount and honestly, I did not feel as burnt.  At least there was some financial savings to me.

2.  I have recently implemented a policy that everyone in the production house bears the costs of someone's error or lateness.  This refers to unpicking clothes, not our own set deadlines, etc.  At the end of the month I take out these amount which also results to some form of cost savings.  Truth be told, I don't deduct as much as I should because really, these people have families but I deduct just enough for them to feel the pinch and it seems to work.  Plus now that everyone's pay is deducted, they all now act as a check on each other to minimize errors.

Great!  That’s all I have to say.  Hope this helped.  Let me know what you think in the comments section. 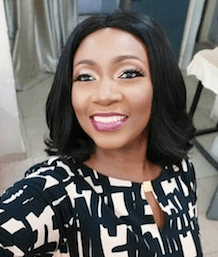 turn their love for fashion into a viable business.

Someone you know needs this article.

If this helped you, help them out by sharing this article on social media.

To get notified about our articles, please sign up below:

Learn how to produce neatly finished clothes with

As budget and demand allow, surround yourself with

The Online Sewing Classes are perfect for beginner

For example, the pattern I will use to create a me

Now, this doesn’t mean you should hide feelings

Someone you know needs this

Someone you know needs this.