Is the Customer Always King Even at the Expense of Your Reputation?! 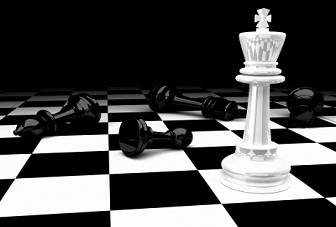 http://www.mbaskool.com/images/stories/articles_2012/customer_king.jpg
So we had this conversation last year – is fashion design about creativity or decency?    Here’s the link just in case you haven’t read it:
Creativity vs Decency: What is Fashion Design Really About?!
I decided to revisit the “Creativity vs Decency” debate when my students pointed out that the controversial dress appeared to have been custom-made for the lady.  And they are probably right… judging from how the strips were strategically placed.
Although I still maintain that the dress was a clever piece of work and pretty much everyone who responded to me via Blackberry agreed with me that fashion was more about creativity, my question now became “why create an outfit for a plus-size lady that would have been more suitable for a smaller size”?!
I guess the real question is:
“What happens when your customer requests for an outfit you know fully well would be unflattering for her size and body shape?!  Would you still go ahead and create the outfit even when you have your own reservations about it and you know it will give your reputation as a creative expert a bashing?”
I know this is a major challenge of many designers and seamstresses.  I have heard so many horror stories and the first thing that always pops to mind is:  “Why didn’t you just walk away from the order?” 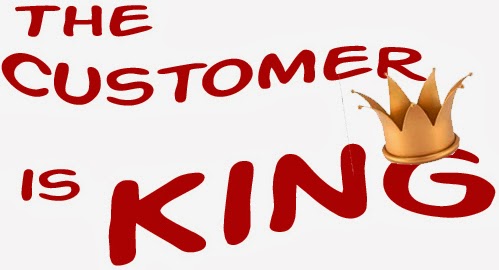 http://michelleharbour.files.wordpress.com/2012/02/customer-is-king.jpg%3Fw%3D300%26h%3D214
A customer comes in with a picture in a magazine asking you to create the exact same outfit.  Or in the case of the lady, asking you to create something scandalous that will turn heads!
You know deep down that the dress you are looking at is on a Size 10 model while the person asking for a replica is a Size 20.  Or the dress in the picture is made of pure silk and she has come with the thickest ankara or taffeta fabric.
You know when you are done, she will probably look a mess simply because she is a bigger size or the the fabric is different.  You advise her against it but she insists on the dress OR worse you say nothing and go ahead with the order because:
1.  you do not want to offend her;
2.  you do not want to lose her patronage; and
3.  the customer is King and you are there to do her bidding even against your better judgement.
When you are done you are embarrassed by the finished product but you console yourself by saying “well I warned her but she insisted so I did what she asked me to do”.  She goes for the event and she gets the following feedback loud and clear:
“My goodness, who created this nasty outfit”; or
“Did a designer create this or a carpenter?” or
“Naija and the nonsense people create sha” or…
like the comments on the picture in the previous article:
“What is creative about this?!”;
“This is madness”;
“This is only suitable for a Porn Convention”; &
“Designer Error or Wardrobe Malfunction”.
In fact you get only negative publicity from the outfit you spent hours slaving over.
She comes back to you yelling and screaming conveniently forgetting that she had initially insisted on the design.  When you remind her, she says “Well you should have advised me!  You are the expert!  You should have known I would not have looked good in it but because you wanted my money you just went ahead”.  She rains insults on you, calls you every name in the book, promises never to patronise you in her life again and slams the door so hard the hinges fell off.  You are left feeling completely miserable with your dignity in tatters!
Is she justified?!  Well… perhaps not for the insults or for breaking your door but she has a very valid point which I completely agree with.  You are the expert and should have advised her appropriately, even if she had insisted.
If you had politely refused and walked away from the project even at her insistence or offered her a more suitable alternative, you would have done both of you a huge favour and kept both your dignities intact! 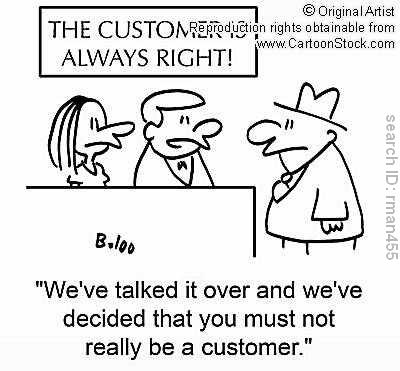 http://3.bp.blogspot.com/_3j1mn_r3Eno/TQixKPsQNwI/AAAAAAAABS8/6bmWtu7qDLE/S1600-R/rman455l.jpg
Yes the customer is king but truth be told, would you want to risk your reputation and all you have worked so hard for over a project you know you have no business being a part of?
I recall attending a wedding recently and the decor was so tacky, the first thing that came to my mind was “my goodness, who did this awful job”?!  I made it a point to find out who the decorator was just so I would not make the mistake of patronising her.  During my investigation, I was informed that all the tacky props at the venue were specifically requested for by the bride and the place was set up exactly how the bride wanted it.
The only problem is, noone knew that and noone cared to know.  All we saw was what we some utterly nasty work which gave the decorator really bad publicity!
So what am I saying?!  Yes we may need the money but as designers and seamstresses, we are first and foremost our clients’ consultants and should advise them appropriately.  We also need to make informed decisions on which projects to undertake by weighing the pros and the cons.  Don’t forget that if you do go ahead and create a garment that doesn’t sit on your customer the way it looks on the model in the magazine, she would have conveniently forgotten all the warnings you gave her and just label you as incompetent.
And yes the picture below might be really harsh, but sometimes, it just might be the better option in such cases.

You will be surprised that the client will respect you more for it and patronise you even more because s/he knows you have his/her best interests at heart!
That’s all folks! 😀  Here’s me wishing you a great weekend ahead!
Cheers!