Words of Advice from a Seasoned Businesswoman… 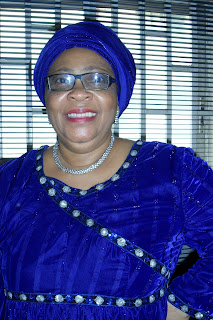 Yes I promised I’d do this AGES ago but somehow kept losing my interview sheet or something else always came up.  But today, though I had other stuff to write about, I thought it would be good to start off your week with an encouraging story from my major role model.  A story I grew up listening to but never quite appreciated it  until I became an entrepreneur.  A story that sort of corroborates my take on doing business without necessarily having lots of money.
Ok… here goes…

Meet Mrs Adebola Alanamu, my FABULOUS mother!  Yeah…. she’s a stunner right?!  Can…and will probably give me a run for my money anyday!  😉  She is one person I know who understands how to use overdrafts and the banking system to its fullest advantage.  I write her letters and I am amazed at how she is able to manipulate her finances in such a way that she is pretty much a don at her bank.
Anywayz… here’s her story…
“I had no money when I started business.  I was working in Nigerian Breweries Marketing Company, starved of promotion for about 3 – 4 years so I moved to Wema Board Estate Limited as an auditor.  As time went on, I felt it was time for me to leave as I had no help and had to stay at home with my young children.  But I was in a predicament.  I had to pay up my debt to the company and still had my children to feed.  But since my children came first, my mind was made up!
Before I left the company, I had a side job where I was supplying cement and sand to build the Festac ’77.  I paid up my debt to the company with some of the money I had made from that venture and used the rest to take care of my kids while I was at home with them.  Of course the money ran out eventually.
One day, out of desperation, I thought to myself ‘let me meet my bank manager, maybe he can help’.  Mr Komolafe, still a living witness, listened to my ordeal, looked at me for a looooong time and approved a N2,000 overdraft.  With this N2,000, I continued to supply cement and sand and that’s how my business took off!  I worked hard, always paid my employees on time, saved diligently and never denied my children the necessities they needed.  And I never for once allowed myself to think about the fact that I was a graduate supplying sand!
From there, my overdraft increased to N4,000 and then to N10,000 and before I knew it, my business expanded to include cement block making.  And from block making, I moved to the oil industry as the dealer of a petrol station of one of the major marketers.
Same thing happened when I moved.  I needed to deposit N40,000 to Nolchem but I only had N25,000.  The person who promised to assist with the balance shattered my hopes on the eve of payment so I ran to my mother who loaned me the money and told me I must return the loan in 3 months since she had retired from selling ankara in the market.  And then again my business began and grew.
I built my business with overdrafts and zero collateral.  And for those who believe everyone in the oil industry makes lots of money, that’s not true.  Only high turnovers make sense.  All I had was the determination to succeed, my major motivation being my children, building relationships and paying back my loans and overdrafts and that is what has sustained me till today.  I became such a good businesswoman that even my company then, National, became my guarantor at the bank when I was moved from one petrol station and was asked to be the dealer of their prime station that had just been built by Shell.
I look around me today and see so many proud yet lazy people.  There is nothing you cannot do to make money.  As you can see, I even sold sand! Even as I speak, I still sell pure water at my retail outlet and make at least N100,000 a month from it – AND I pay my taxes as at when due.  So many youths today are proud. They need to make ends meet YET they feel insulted when you give them options.  For me, it’s not necessarily what you sell but how you sell it and more importantly, how you treat your customers.  With diligence, hard work and steadfastness, you can achieve a lot and you need to be motivated.  My major aim was to educate my children to whatever level they wished to go and still live a comfortable life.  This I have done as a single mother.
I have been in business since 1978 and I am still in business.  So I count myself as a very successful businesswoman!”
😀  Yup so do I.  Not easy bringing up 5 kids pretty much all by yourself for a substantial part of their lives but she did it and I must say she did a mighty great job of it as well.  After all, look how I turned out 😀 (LOL)!  But seriously, she was really strict!  We used to fear her a lot but now we love her to bits!  Thank goodness she’s really chilled out now!  Goodness… she never spared the whip at all!  I still remember that electric wire rubber, we called “rubber” she used to flog us with! Now I look back and I’m thankful she did only some of and not all she did though I must confess, I understand why now.  She did what she had to.  Her story was much longer but I edited it to capture the important points.
So what’s the moral of the story?!  I’m sure it’s pretty obvious.  Be encouraged, be determined and remain focused!
I leave you to enjoy pictures of my mom and I.  Yup, she is always with me every step of the way!  And y’all shouldn’t ask why I’m dark either.  People keep asking me like I’m supposed to know why I chose my dad’s complexion. 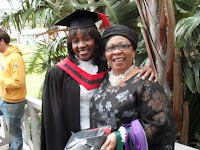 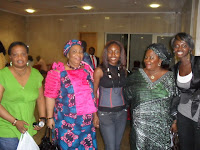 On a business trip to Dubai which also coincided with my bday last yr  & in her office last year, on her birthday wearing an outfit I made for her.

Anywayz, have a great week everyone!