The Appalling State of Customer Services!

Let me rephrase. The Appalling State of Customer Services in this environment!
I’m sorry but this is ranting and raving time!  I did warn you that it may happen sooner or later but it really is annoying!
Someone please explain to me why exactly I am paying for a service and when I complain about the service, I get attitude from the vendor like “errr…. how dare you complain about the service I just rendered to you”!  I mean like seriously?!  The typical vendor around here acts like they are doing you a favor when really the truth is you have paid for it!  Sometimes they forget that without customers, they would not be in business!
What exactly brought this on?!  I’ll tell you just now! >-( 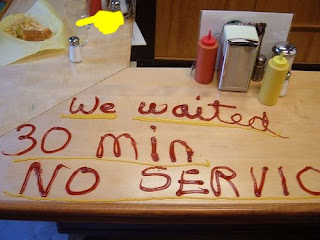 http://1.bp.blogspot.com/-9K6QsP856rs/T1nBgkA7HrI/AAAAAAAABYE/NmCtIDz7Tzs/s1600/No-service.jpg
And how about our Emergency Services?!  Ha now THAT is another story entirely!  You will just keep waiting!  The day after the Dana Air crash I heard some violent sparks and some smoke coming from somewhere that seemed really close.  So I called “emergency services” and this “bored girl who sounded like I was disturbing her manicure session” picks up the phone and asks me to go closer to identify the source of the smoke before they can send the rescue team.  I was like what?!  Should you not be telling me to evacuate the area?!  We eventually found out it was the PHCN cable and residents had to let it burn to a “comfortable” height in the rain before putting out the fire themselves.
Sigh……. I can go on and on.  But really, what I find really upsetting is the fact that many of us just allow ourselves get exploited.  Despite being educated, we would rather suffer in silence.  No wonder people snap and the average person is stressed out around here.  My question is… when will this all end?!  I refuse to be made to feel guilty simply because I am asking for corrections to what what I am entitled to.  It is not a right, it is an obligation!
In all fairness though, some people have actually accepted correction and tried to make amends.  I would never forget a restaurant I went to… in fact 2 restaurants who gave me a complimentary meal / dessert to make up for bungling my order… even though my dates wondered why I complained.  In their opinion, I should have let it go… and one was actually wiling to pay for another meal.  Like seriously?!  I told him no ways and demanded to see the manager who was nice enough to prepare an even nicer order and kept checking on me to be sure I was pleased with it.  Only after then did I think… gosh there is still hope for us…
Interestingly enough, no prejudice to indigenes or anything, but I wonder if this only happened because the restaurants were run by foreigners?!  I don’t know.  But one thing I do know is many of the ill treatments I have received have come from Nigerians…. our fellow “compatriots”.  Which is very sad!
Yes a very long one but yes it had to be done!  So do I feel much better?!  Well… just a little bit!  Especially after seeing these jokes on poor customer service on the internet:

http://www.cartoonstock.com/lowres/cza0816l.jpg
At least I have been able to let go of some steam!  Thank you for lending a “reading eye”!
Mucho gracias!  MWAH!  😀
Trending
Why Businesses Fail


Oh… here’s an interesting perspective from the other side…
http://www.tenerife-training.net/Tenerife-News-Cycling-Blog/2008/03/thats-business/customer-service-etiquette-for-the-customers-not-the-business/
I still believe, no matter what, the customer is king!  And this blog captures it perfectly:

Yes you do come across difficult ones and when you can’t handle them, offer them a sincere apology, an alternative or a refund.  Simple!  In a nice way of course… 😀  Perhaps we can all learn from this particular post on customer service!  I know many people around here need it!